On Saturday, June 12, 1999 – following a mid-morning breakfast-brunch at a nearby Bruegger’s Bagels and numbering 10 (up from the 1998 inaugural crew of 8) – our group embarked on what has turned out to be one of our few BIYF Festival road trips: Touring the James Page Brewery.

Thanks to The Internet we were able to find out that a) the James Page brewery was a brewery in the Twin Cities area that actually gave tours and b) who to contact to set up a tour. My impression is that this was much more uncommon back in those days and it was certainly not as frequent an occurrence as it is in our modern, craft-brew-friendly, hipster-enabled Golden Age of Beer. Our Itinerary from BIYF II is the closest thing we have to a written record of the event:

1:00 PM – Brewery Tour: The James Page Brewery of Minneapolis has agreed to make special arrangements for our group to tour their brewery on this date. Normally they only give tours on the 1st and 3rd Saturdays of each month, but have made an exception for our group.

Dang. I used to make itineraries for us. I don’t think they really added anything other than a humorous faux legitimacy to the event since they often didn’t reflect what actually occurred, but the effort I used to exert… I’m so laissez-faire these days.

Though the brewery was selected based on convenience and it was mostly an unknown quantity to us, James Page had a history in the Twin Cities that predated our interaction with them. Let me lean heavily on Wikipedia for much of the subsequent information:

The James Page Brewery was founded by Minneapolis attorney James Page in 1986. It was located on Quincy Street in Northeast Minneapolis, in an aging industrial warehouse building. The brewery’s infrastructure was cobbled together from secondhand equipment. Page never exceeded more than about 1500 barrels per year of production until it was sold to a group of investors with a background in food marketing in October 1995.

The new owners of the brewery thoroughly re-invented the brand. They created a fictional character to personify “James Page,” who bore little resemblance to the founder of the company; he was a rugged American frontiersman. They also stopped the practice of trucking the beer to distant bottling lines. Instead, they produced the bottled product as a contract brew at regional breweries. The draught product continued to be brewed at the Quincy Street brewery.

In 1998, Page became one of the first American craft breweries to package its beer in cans. The canned product was brewed and packaged under contract at the August Schell Brewing Company in New Ulm, Minnesota. It won a contract with Northwest Airlines to feature the canned beer on certain domestic flights.

This is about where we come in. The canned James Page beer was pretty easy to find (in Minnesota) and the Boundary Waters Lager and the Burly Brown Ale are the ones I remember. But since I have the information to share:

I don’t remember a lot from the tour to be honest. I remember it was informative since I knew little about the beer-making process at the time. I remember our host was pleasant and that we got to sample some beer as a part of the event. I liked that. Honestly, most of my memories come from the few, ancient, hand-crafted, “digital” photos that still survive:

I also remember that James Page was about to go public and while the beer was flowing there was a brief discussion about making a small communal purchase. Fortunately, this would have proved complicated (by the IA/MN nature of our group, among other things). It was also high-risk/low-reward and sober heads later opted to give it a pass. Things didn’t go particularly well for James Page as time marched on:

Despite a more aggressive marketing push, the brewery’s new management was not able to turn a profit. Although the Quincy Street brewery produced beer for its draught accounts, the bottled product was a contract brew and this did not help its reputation among beer aficionados. As a result, Page management made the acquisition of a bottling line a top priority.

In 2000, James Page had a stock offering, and the first $400,000 was specifically earmarked for the bottling line. It advertised the stock offering on six-packs, soliciting investments as small as $285. The company announced that it had successfully raised the maximum $855,000 from over 1,000 supporters in January, 2000. But the money was never used to fund expansion; instead it was used to lower the company’s debt burdens, and the bottling line was never built. In 2002, the brewery was shut down. The company continued to contract-brew beer at other regional breweries.

In 2005, the company’s final asset was liquidated when the Page brand name was purchased by the Stevens Point Brewery in Steven’s Point, Wisconsin.

And that was the last anyone heard about James Page for a while. In recent years, however, the James Page name has resurfaced:

The new owners/brewers have apparently changed their line-up a bit since the brand reappeared, but I haven’t seen any cans in person to confirm if their site is actually current. It’s still marked “Copyright 2013” (the same as the initial press release) in the header.

If their stats on Untappd are accurate (and I’ve no reason to think they aren’t), then new “JP” brews are still being sold (and consumed) as of the date of this post’s publication. Of course they now come from Wisconsin and the facility we toured no longer plays any part in their brand or beer.

And if this link is still valid, it appears the old James Page Brewery location is up for sale or lease: 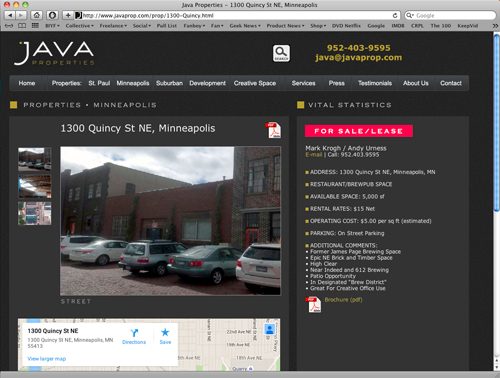 At least I believe this is the location we toured. Let’s say that it definitely is. Perhaps when I win the lottery I can open a BIYF theater there for us. One with a dedicated Turkey Bender Home Brewing facility. It would seem a fitting use for it and would bring us almost full circle in a way.