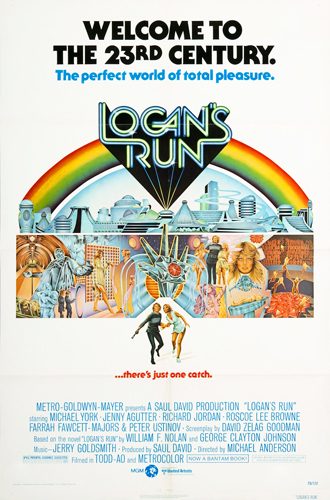 IMDB Description: An idyllic sci-fi future has one major drawback: life must end at the age of 30.

I end my BIYF 1998 re-watch with 1976’s Logan’s Run, arguably the the last major gasp of pre-Star Wars science fiction films as well as our final “BIYF I” film. Not Of This Earth joined me on this one so I got to watch it above ground with moral support. Still no beer/alcohol required (to date) to survive my journey.

Logan’s Run is a bit of an outlier in some ways compared to Zardoz and Barbarella. It’s a “big-budget” effects film that was, if not critically respected, at least positively reviewed as fun and entertaining. It saw reasonable financial success, did well enough that it spun-off a short-lived television series, and it was frequently re-shown on network/local TV – with a few edits, of course. It won awards. It almost had toys. I was certainly more intimately familiar with Logan’s Run than with either of our two other inaugural films.

I might even go so far as to dub this the first example of what I think of as a BIYF “palate cleanser” film: A decent or historically significant BIYF-like film that manages to transcend its failures/datedness (if any) and survives on merit. Or occasionally on unabashed, almost universally shared nostalgia. Either way, its enjoyability serves as a welcome respite from the alternative. Much like letting a prisoner rest and eat before resuming torture.

That’s actually a little harsh in this case. Honestly, despite the periodic WTF/crazy, these first three films have been very watchable and I expect this to continue through the next few BIYFs-worth of content. We hadn’t even really started figuring out what BIYF was/is at this point and there’s a fair amount of legitimately entertaining content in the playlist early on.

The need for “palate cleansing” doesn’t really start to surface until a bit later when, under the guidance of our venerated Movie Czar (“He really has our best interests at heart.”), we begin to more clearly define what sorts of things will be our focus. This gradually emerging focus is also muddied during the next few BIYFs with the introduction of Movie Voting which I’ll no doubt get into in a later post.

As for Logan’s Run, I’m going to have a tough time being critical of this one. Clearly parts of it are very much a product of its time and can seem naive or quaint when viewed from the vantage point of 2016. You can almost always find humor when you look at the distant past through the lens the present. Who doesn’t cringe and laugh at some (most) of the fashion choices they find in their old photos? But this film is so familiar to me, so still a part of my day-to-day lexicon that I don’t think I can judge it harshly or even fairly. It feels like home. A nostalgic Sanctuary, if you will.

That’s probably something I’ll have to fight against a lot during this marathon, though. I’ve always been pretty good at putting myself in the right frame of mind for watching old film and TV. It’s a trait that’s served me well on my chronological re-watch of classic Doctor Who, for instance. It can be a tough slog if you don’t prepare yourself with the right mindset/expectations. In the case of sixties Doctor Who it’s a matter of steeling yourself for the leisurely, occasionally lethargic, pace and keeping in mind that it was all only meant to be viewed one time, 25 minutes at a time. With Logan’s Run I think it’s more a matter of being able to successfully look at it in context of the continuum of similar films. Some folks can handle that better than others.

There’s a lot to unapologetically love in Logan’s Run, though. The visuals, the 70s aesthetics and mores, the way it kinda bridges the gap between films like Soylent Green and Star Wars, Jenny Agutter…  but there’s a fair amount of substance you can unpack as well. Check out John Kenneth Muir’s write-up for some of that. And if you think your secret Logan/Francis slash fiction is the pinnacle of that particular line of reasoning, you clearly haven’t given it enough thought.

Next up, BIYF steps off of the sun porch and makes a brief foray out into the real world. Until then, let me know your thoughts on Logan’s Run in the comments. Is it really our first “palate cleanser” or is it solidly “BIYF film” material? We know who wins out in the end, but who does Logan love more: Jessica or Francis? Is The Circuit a descendant of Tinder? Let us know below.