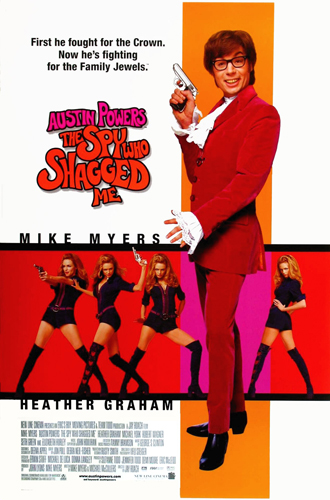 IMBD Description: Dr. Evil is back… and has invented a new time machine that allows him to go back to the 60’s and steal Austin Powers’s mojo, inadvertently leaving him “shagless.”

In addition to the idea of a road trip, BIYF 1999 also introduced another new semi-regular occurrence to our annual gathering: heading out to a local movie theater to take in a first-run showing of a film as a group in addition to our home viewing experience. Occasionally we’ve done this more than once per weekend and the choice of day has varied from BIYF Friday through BIYF Sunday, but gradually we’ve settled into attending only one (if any) “away” film per BIYF and we usually go on Friday or Sunday in order to leave Saturday free for our more challenging viewing. Also, availability of sober drivers on BIYF Saturday has been a concern.

If I’m not mistaken, I believe in 1999 we actually left the safety and security of the Vincent Avenue BIYF HQ on Saturday to attend Austin Powers: The Spy Who Shagged Me. This may have had something to do with an indifferent group reaction to the slate of films selected via BIYF Movie Voting (more on that in an upcoming post) or perhaps alcohol influenced the decision. We may never know (or remember) for certain.

I have to admit to approaching this one with a certain amount of dread as it came time to re-watch it for this post. Trendy comedies sometimes age poorly and I had a vague time-and-beer-addled memory of being disappointed with this film the first time around. Plus, in hindsight its selection seemed like a “target of opportunity” (it was actually in theaters and we agreed enough about it to all go) and I feared it might not really be what we’ve come to think of as a “BIYF Movie” (or at least a “Movie with Themes Appropriate to BIYF”). To be fair, the latter fear is probably something that will apply to all of our “away” films since we can only choose from what’s available in theaters at the time.

I also have to admit that my trepidation was largely unfounded on both counts. I had fun re-watching it. It’s still a goofy, often juvenile, comedy and if you don’t enjoy those you won’t enjoy it, but there’s some heart in it and it has some genuinely funny moments. It’s far from perfect, but spot-on casting, nostalgia targeting some of our BIYF sweet spots, and some surprising connections to modern entertainment made this one of our viewing selections that was worth my time to revisit.

I think my past disappointment with this film can largely be traced to two things. I would dub the first of these Austin Powers Fatigue. Austin Powers: The Spy Who Shagged Me came a brief two years after the first Austin Powers film and during those years the character and his catchphrases were ubiquitous to say the least. While Austin Powers: The Spy Who Shagged Me is fun, it is not – by its very nature as a sequel – particularly original. It hits most of the gags, catchphrases, and notes from the first film again and I think in the context of 1999 a lot of those came off as pretty flat. We’d just seen them in the first film and then they’d clubbed us repeatedly with them in the interim. Given a fifteen-plus-year break where I don’t think I’ve even seen a repeat of these films, the reused gags manage to feel original again and I think the whole film probably works better than it did at the time.

All of the humor involving Fat Bastard (even tangentially) is based around disgust and revulsion. Gross-out humor. While I won’t criticize those that enjoy this, I feel like even by 1999 I had moved out of the phase where this did much for me. I don’t extract much enjoyment from the kind of discomfort it induces and extended scenes that focus on drawing out the pain of it lose me pretty quickly. That said, when I’m not burned out by the fatigue described above (and I wasn’t this time around) there doesn’t seem to be nearly as much as I remembered and it passes pretty quickly. Fat Bastard is still there, but he no longer sinks the film for me.

And that’s great because there’s a lot to enjoy. The actors (both new additions and characters from the first film) and cameos in the film are fantastic. The cast includes some BIYF favorites: a returning Michael York (making him our first repeat actor) and long-time character actor Charles Napier (we’ll see him again). Heather Graham is a good new “Powers” girl and names like Will Ferrell, Tim Robbins, Clint Howard, and many more shine in bit and cameo appearances. Special mention must be made of Rob Lowe as the young Number Two. I think he’s my favorite thing in this film and he should always play Robert Wagner. It’s a Josh-Brolin-playing-Tommy-Lee-Jones-worthy performance.

Also on the MVP list is Verne Troyer debuting as Mini-Me. It’s a role that could have gone horribly wrong but it’s played with such feral zeal that it works marvelously.

Whether he’s mirroring Dr. Evil, threatening Scott Evil, or getting chased off the conference table with a squirt bottle like a cat, he makes it work.

In case it isn’t obvious by this point, this isn’t going to be a true BIYF film. It doesn’t attempt to be anything more than it is and it succeeds in being an enjoyable and technically competent film. It’s funny, but not unintentionally. It aims to be entertaining and I was entertained.

Surprisingly though, it really does manage to be much more of a BIYF-friendly selection than my admittedly faulty memory thought it might be. If I had to label it, I’d probably class this as another “palate cleanser.” It fits a lot of the trappings of a BIYF film, but not the requisite failures. Some examples of BIYF-y traits:

Perhaps even more surprising is the number of times during this re-watch I was reminded of things that occurred in other films/shows. That wouldn’t be shocking except these films/shows were all produced post-1999. Was Austin Powers: The Spy Who Shagged Me an influence? Was it coincidence? Are they both just mining the same source material for inspiration? You make the call:

OK, I might be stretching a bit to make a few of these connections. Not the Yondu one I suspect, but maybe some of the other ones. Maybe.

Regardless, this has been a fun side-trip on my journey and I’m ready to drive off of the cliff and head back into BIYF-proper territory. Let me know your thoughts on this selection, on BIYF “away” viewing in general, or on anything relevant in the comments. BIYF 1999 continues soon…